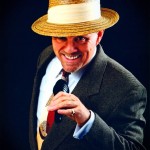 Over the years, Rick Blessing has performed with a number of jazz groups across the United States, Europe, and South Pacific.

Blessing’s father was a career Air Force jet pilot stationed in Europe.  Because of that he got the chance at sixteen to start singing with touring jazz bands at the various bases in Europe.

After college, Rick joined the military as an entertainer in the Special Services Branch.  As years passed, and musical trends changed, his personal love for the swing music of the 50’s Sinatra era never wavered.  By 2000, it seemed that swing music had made a dramatic disappearance.  This re-sparked in him the desire to do something about it.

Settling in Los Angeles, he began to perform with a number of that city’s most renowned big bands.  There, he earned a growing reputation as a highly dynamic and electrifying performer.  In 2007 Blessing garnered national airplay, and rave reviews with his swing debut album; “I’m Just the Guy for You!”

In addition to singing original swing material, his love for Frank Sinatra prompted him to put together a secondary act.  This tribute extravaganza to “The Chairman of the Board” became widely regarded and as “L.A.’s #1 Sinatra Show!”

Coming full circle, Rick returned in 2012 to his home state where it all started,  residing in Greeley, Colorado and  performing with the John Mills Orchestra at a series of concerts throughout Northern Colorado.  At that point, he decided to move once again back to his hometown of Colorado Springs, where his family had been stationed years before, and where they later decided to retire.

Since returning to the Springs, Rick has performed Sinatra concerts with the Front Range Jazz Lab Band (All members of the famed Air Force Academy Falconaires) to large crowds at the Beautiful Stargazers Theater.

Most recently, the singer has also been appearing with his trio, quintet, and octet groups at various concerts and clubs.

Rick Blessing is available for bookings.  Hire his trio, quintet, octet, or full orchestra!  He performs at weddings, private parties, as well as corporate functions.